This article looks into managed grazing and how this solution can help to address climate change. 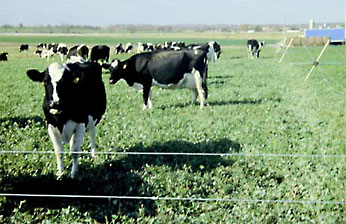 This is the second in a series of articles on Project Drawdown which analyses the top 20 most effective solutions to reverse global warming. You can find a link to my series here.

The authors begin the section on managed grazing with the bold statement that: “over the long term, grazing animals create extraordinary environments.”

But that: “when that same land is plowed over and over or grazed by domestic animals, the land degrades over time and loses its soil carbon.”

In a nutshell they explain that: “managed grazing imitates what migratory herds of herbivores do on wetlands.”

Let’s get into the headline numbers that allow managed grazing to make it into the top 20 most effective solutions.

The numbers produced by Project Drawdown indicate that for a net cost of $50.5 billion, managed grazing would reduce CO2 by 16.34 gigatons and result in net savings of $735.3 billion. These are certainly big numbers.

The authors go on to say that: “when cattle and other ruminants are managed on grasslands in a holistic way, it can be the best thing for the land.”

The authors reveal that: “a meta-analysis of research shows that the impacts of grazing depend heavily on local climate, soil coarseness, and the grass species that dominate the landscape.”

But that: “improved grazing can sequester from one-half to three tons of carbon per acre.”

The authors reveal more about the benefits of managed grazing with the statement below.

“Although rates of carbon sequestration are much discussed by climate activists, the farmers and ranchers who are leading the way are not doing this to sequester carbon or impact climate. They are increasing carbon to create healthy soils and livestock.”

This article looked into managed grazing, which was revealed by Project Drawdown to be the 19th most effective solution to reverse global warming.

I think it is an interesting solution with potential to address climate change at a global scale.

The only drawbacks are that it seems quite difficult to quantify and that if done incorrectly, it could lead to more greenhouse gas emissions from methane. It is an area which needs more research to get to the bottom of this.

It also seems like a solution that will bump into a lot of vested interests who do not want managed grazing to become mainstream. But this is to be expected with any far-reaching solution. It remains an interesting and potentially highly effective away to address climate change.

Please share your thoughts in the comments section below or reach out to me on social media. How do you think managed grazing ranks as a climate change solution?